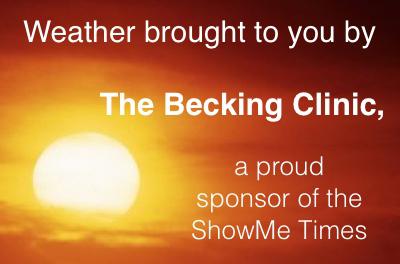 Weather brought by Becking Clinic, a proud sponsor of the ShowMe Times.

Rain with thunderstorms developing around 11:00 a.m.  The rain should en around early afternoon.  Decreasing cloudiness with temperatures falling to near 69F.  NNW winds shifting to E at 10 to 15 mph.

This afternoon partly cloudy with afternoon showers or thunderstorms.  High near 90F.  Humidity 79%.