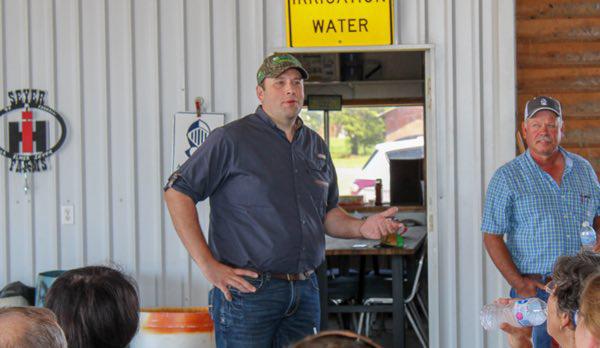 Oran, Missouri - Congressman Jason Smith (MO-08) held a farmhall with local Scott County farmers this week, taking questions and providing a legislative update on a variety of federal agriculture issues. This month Congressman Smith is meeting with farmers and ranchers all across southern Missouri to discuss the different challenges within the agriculture industry.
Congressman Smith provided the group a legislative update on the 2018 Farm Bill, his work to repeal the Obama-era Waters of the United States Rule, and President Trump’s ongoing trade negotiations.
The crowd, many of whom were young farmers, expressed concerns about the ability to find and hire workers on their farms. Congressman Smith said the House-passed Farm Bill addresses this issue.
“Farmers know the value and pride in a hard day’s work, but the federal government is incentivizing people to stay at home and collect from the government instead of getting to work. In two of the counties I represent, the biggest concern I’ve heard from farmers is how hard it is to find good help. As it turns out, those counties had the highest population of able-bodied people receiving government assistance. The Farm Bill we passed in the House includes commonsense work requirements for government aid,” said Congressman Smith.
When asked about the ongoing trade discussions with China and the European Union, Congressman Smith stressed that the negotiations will take time and said he speaks with the White House weekly to share local farmers’ concerns. Congressman Smith said President Trump has already given Missouri’s ranchers one reason to celebrate and he’s optimistic for more positive news.
“In 2009 the European Union set up a trade barrier where they would only accept 45,000 tons of American beef duty-free, anything more was subject to a tariff. In seven years, the U.S. went from providing 99% of the E.U. beef market to 33%. These are the trade barriers the President is working to eliminate, and after he negotiated with the E.U. they have agreed to adjust this quota to allow for more U.S. beef,” said Congressman Smith.
Congressman Smith said the Chinese government has been taking advantage of the world for years, and President Trump is standing up to them.
“I have trust in the President to reach a better deal for America’s farmers,” said Congressman Smith. “I don’t trust the Chinese, who are targeting our farmers with these tariffs. There are two types of businesses in China: government owned, and government subsidized businesses. That’s tough to compete with as a farmer in southern Missouri. President Trump is doing the right thing and standing up to their unfair practices.”
Missouri Farm Bureau Southeast Regional Coordinator Matt Bain said Congressman Smith has been extremely helpful to local farmers.
“Scott County’s farmers could not have a better friend than Congressman Jason Smith,” said Bain.
After the Congressman took questions and led a group discussion, younger farmers in attendance displayed how they use a drone to monitor crops and check for problem areas on the farm.
“We certainly didn’t use a drone on my family farm growing up,” said Congressman Smith.
https://showmetimes.com/Blogpost/vasq/Congressman-Jason-Smith-Holds-Farmhall-in-Scott-County

More from ShowMe Times:
Previous 5Get Next 5
Subscribe to "Political Blogs"