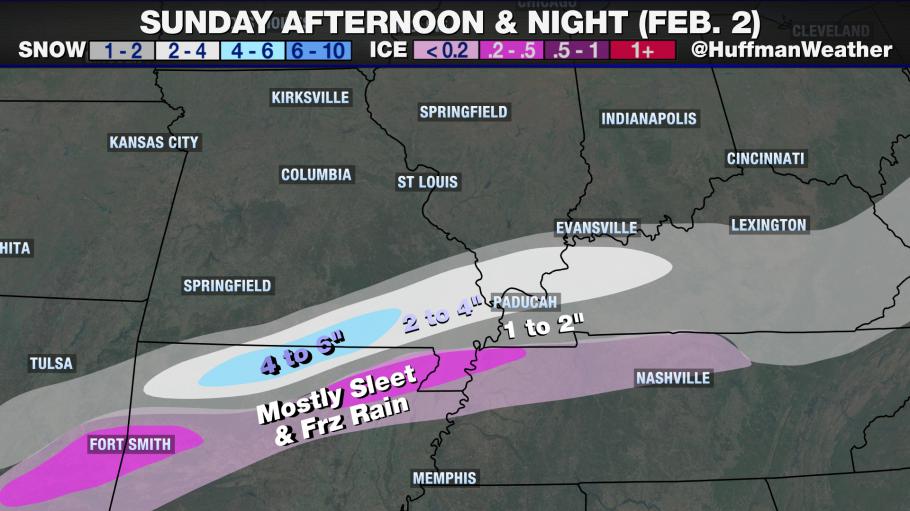 Click here for Sunday 2pm Update
A fast-moving but ill-timed winter storm will blitz Southeast Missouri with a mixture of sleet and snow on Super Bowl Sunday.  The colder air required for the sloppy mess will arrive late Saturday night and early Sunday, with temperatures falling below freezing when showers end briefly as sleet or snow with little or no accumulation.  Following this front will be another weak disturbance flying in from the southwest, pulling moisture northward into the cold air.  A mixture of freezing rain, sleet, and snow will develop across much of central and northern Arkansas Sunday morning, quickly spreading northeast across Southeast Missouri by Sunday afternoon.  Although amounts will be relatively light, the fast-hitting nature of this system combined with the timing when many people will be on the move to and from their Super Bowl parties, makes it especially hazardous.
The air will likely be cold enough north and west of a Corning, AR to Sikeston, MO line for mostly sleet and snow from this event.  This includes Dexter, and in these locations accumulations will range 1 to 2 inches where sleet mixes in initially, to as many as 4 inches near a Poplar Bluff to Cape Girardeau line where it will be nearly all snow.  Temperatures during the event will be falling into the middle and upper 20's by Sunday evening, likely resulting in snow-covered roads through Monday morning.
TIMING AND AMOUNTS: