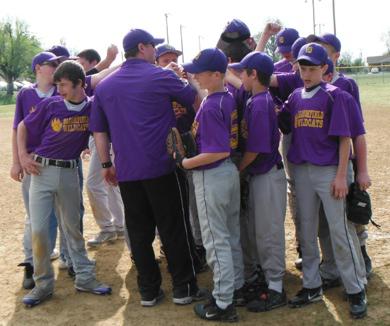 Dexter, Missouri - The Grant Street baseball park was filled with action Saturday as the T.S. Hill Middle School program hosted a four-team area tournament. The middle school teams from East Prairie, Dexter, Bloomfield and New Madrid County Central were on hand to increase their game count for the 2013 spring season.

"We just thought it was a great chance to get the teams together to compete against each other," said Dexter coach Kurt Lovelady. "It's more like we just scheduled games to play more than it is a big tournament."


The first game of the day slated two excellent team in the Bloomfield Wildcat and the Dexter Bearcat Middle School Teams.  The Bearcats finally got their bats rolling in the fourth inning as Mayo led off the inning with a single.  A fielders choice by Henson and an error by the Wildcats gave the Bearcats their first score.

But the Wildcats found their offensive machine as well in the fourth as Dalton Phillips and Alex Gibbs offered base hits and Austin Phillips donated a double to the offensive effort.  The Wildcats ended with a 4 to 1 lead at the end of the fourth.

The top of the lineup for the Wildcats led off the fifth inning with a hitting spree of three singles by Jacob Hector, Dalton Phillips and Timmy Hector.  Alex Gibbs had a big time double to bring their score to 8 to 1.

However, the "never say die" Bearcats put their best offensive foot forward in the fifth inning batting through the entire lineup and adding six runs to their score.  The game came to an exciting end with a long fly ball to centerfield that was caught by Bloomfield.  Bloomfield ended the game with a victory over the Bearcats 8 to 7.


East Prairie came into the contest against the New Madrid County Eagles sporting a solid looking group of athletes.  During the pregame warmup, you could quickly see the quality of the East Prairie program.

East Prairie made quick work of the New Madrid County Eagles by defeating them by a score of 11 to 0.


The final stage was set as both first round winners were to play in what was determined by most, the championship of the tournament.  A large group of fans from both teams lined the streets around the park as well as filling the stands.

Bloomfield started the game with Jacob Hector on the mound.  Jacob worked well with his catcher Alex Gibbs to keep the offense of the East Prairie Eagles off balance.  Hector started the first inning in a strong fashion with 2 of his 7 strikeouts and a flyout by the Eagles.

Bloomfield was able to get on the scoreboard in the first inning with some aggressive base running after Jacob Hector and Alex Gibbs were able to reach base on a walk and being hit by a pitch.  At the end first, Bloomfield held a 2 to 0 lead over the Eagles.

The scoreless second inning was highlighted by Jacob Hector again as he collected two more strikeouts.  The Eagles were able to gain a base runner on a single by their catcher, Campbell, but left him stranded on third base.

A three up and three down inning by the Wildcats defense in the third inning gave Bloomfield an opportunity to get their offensive guns out and blow the game up.  Dalton Phillips reached the bases with a solid single for Bloomfield, followed by a walk drawn by Gibbs.  The timing was right for Timmy Hector to deliver a one out double to begin bringing runs home.

Bloomfield's Austin Phillips earned another base on balls to continue to drive.  Phillips offered some crafty base running skills coupled with a smashing double by Kyle Anderson to give the Wildcats a 6 to 0 lead after three innings.

The Wildcats hope for a shutout ended in the fourth inning as the big strong first baseman, Hausman, for East Prairie sent the baseball sailing over the outfield fence.  Hausman was able to drive home an additional run with his blast closing the lead to 6 to 2.

Jacob Hector received a walk in the fourth and quickly made work of advancing the bases with two stolen bases.  Hector was brought home on a hard hit single by Alex Gibbs.  Gibbs also scored in the inning on a base hit by Austin Phillips to create the final score of the game, 8 to 2.

An excited group of Bloomfield Wildcats gathered after the game to celebrate their victory and get pictures made for their team.

More from ShowMe Times:
Previous 5Get Next 5
Subscribe to "Sports"